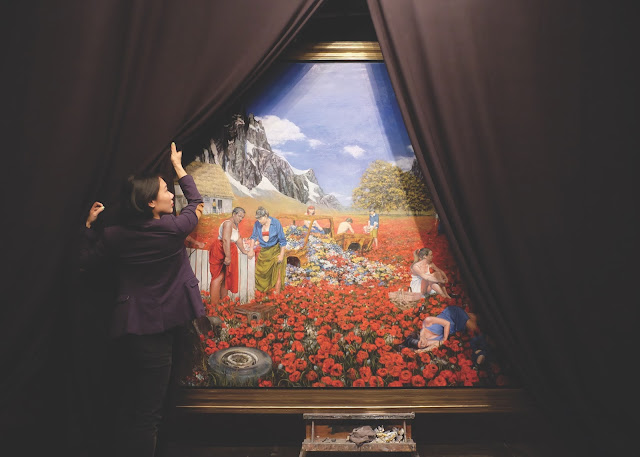 If you go Back to the Future and Forward to the Past, where is the present?
Jay Senetchko’s paintings at Winsor Gallery are big narrative, figurative works that made me think of a future that  might happen or a past that’s been forgotten. They’re oil on canvas paintings with frames that look heavy and ornate like you might find on some 19th century European masterpiece. But there’s a difference. Instead of the edges of the frames projecting forward into the space of the gallery, they recede to the wall to highlight the paintings rather than their containers.
Like traditional history paintings, they tell stories. But unlike those works, these paintings aren’t about kings, queens and generals. They depict a fictional world inhabited by what could be called poor white trash in a rural setting.
Below is a detail from Burial of the Dead showing a group in identical dark grey pants and coats with hoods that hide their faces. They’re all wearing uniform-like clothes and working to clear snow away from a battered old pick-up truck. It all suggests a time when survival depends on group solidarity rather than individuality.
Click Here to view the rest of the article