Today's Abstract Wednesday is brought to you by Wil Murray. This is a unique hand-coloured silver gelatin print, part of a set of 41 that were part of a series called DIE WELT IN FARTBEN. The series was created in 2014, and exhibited at Papier Montreal last April.

Murray also just recently had a solo exhibition in Vancouver at Back Gallery Project. 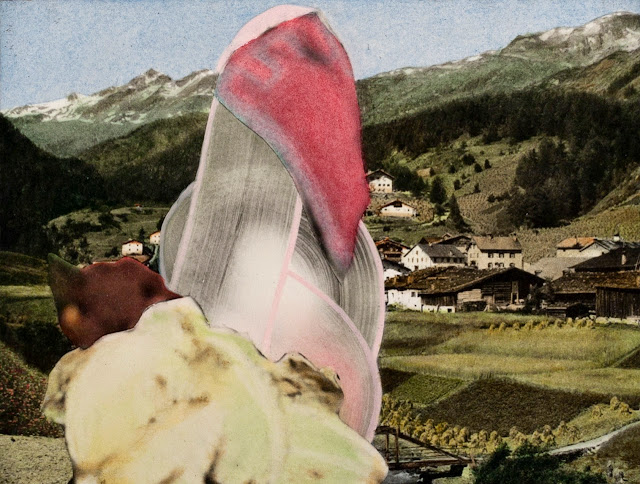 Murray manipulates found images, vintage pigments and photographic processes into hybrid forms that reference the sensibilities and irreverent nature of the pop art era. Colourful mixed-media collages are introduced and reworked into a series of juxtapositions rather than something that can decidedly be called a composition. This interest in an aesthetic of the incidental, the tangential and the circuitous makes sense when one learns that the artist has long been haunted by a quote on writing by the author John Hawkes: “I began to write fiction on the assumption that the true enemies of the novel were plot, character, setting and theme, and having once abandoned these familiar ways of thinking about fiction, totality of vision or structure was really all that remained.”The titles that Murray gives to his work—In My Culture Food Wasn’t Very Important (2011)— also confirm the artist's decision to jettison narrative rationales in favour of more discursive engagements with his material and medium.His larger collages are presented alongside a series of hand-coloured, multiple-exposure photographic prints. In each case Murray's process is made visible in a final image or object. In his prints, the accumulation of media occurs through the manual layering of pigment, paper and photographic distortions that also present as paint-strokes thereby troubling the viewer's reading of the integrity of his materials.