PAUL WONG'S THRU THE TRAPDOOR

Paul Wong has been at it again...

With the help of his gang at On Main Gallery, Wong curated a block-buster of an art show that felt more like an illicit warehouse party than it did a white cube. The site-specific works of over thirty participating artists were installed throughout the warren-like space of the storage lockers below VIVO/On Main. The result was a labyrinthine funhouse that was filled with surprises.

Thru the Trapdoor was intended as a farewell party to the space that has housed VIVO and On Main Gallery for the past decade. It ran from April 23rd to the 26th, and was a spectacular event that will likely go down in local history for its exciting, immersive sprawl. Partyseekers especially enjoyed the last night of Thru the Trapdoor, which transformed the exhibition into the warehouse party that it was aching to become. Memorably, Patrick Cruz' Wreck Room turned into a dancefloor; those looking for a place of respite reclined in the darkness of Dril Art Collective's beautiful camera obscura. Even apocalyptic earth-shakings were channelled in Leo Stefansson's Acoustics of a Storage Room. 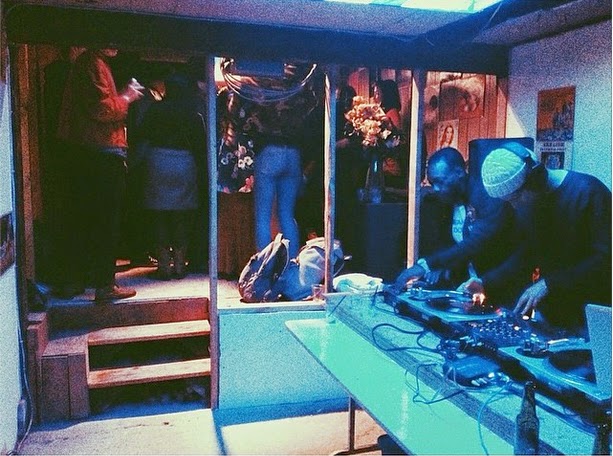 Winsor artists were represented well in the exhibition, from Brian Howell's carefully considered installation of found objects to Attila Richard Lukacs' racy polaroids (installed at street level in the gallery window). A painting by Charles Rea hung in a gutted room lit by a handful of fluorescent bulbs; it was transformed into something eerie and nostalgic by its setting. Even Wong had a single work in his own exhibition: a found mound of concrete located near the entrance to the show, painted to resemble a gold mountain in memoriam to "Chinese gold-miners, rail-workers, and sojourners."

All in all, we were surprised and delighted by Paul's subterranean spectacle, and count ourselves lucky to have been able to be a part of such an endeavour. Looking forward to seeing what Paul's going to get up to next!
Labels: Attila Richard Lukacs Brian Howell Charles Rea On Main Gallery Paul Wong Thru the Trapdoor VIVO Winsor Gallery